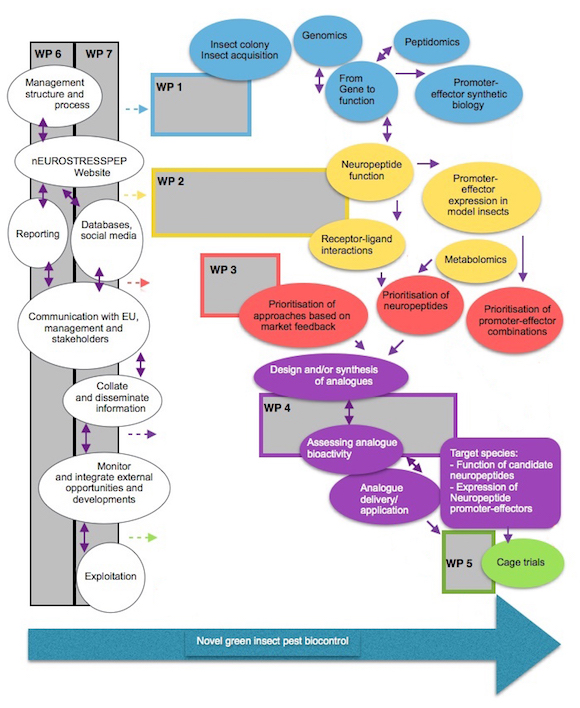 Work Package Summaries (How to View)

Click on the WP Icons on the left to see a summary of the work package outputs.

Work Package 1 (WP1) involves Omics approaches and development of expression systems, providing the foundation for the nEUROSTRESSPEP project. This work package includes establishing and maintaining insect colonies throughout the participating laboratories for experimental studies towards understanding of neuropeptide function in physiology and behaviour. Other work streams in this WP included data mining of publicly available databases and literature to identify neuropeptide sequences (both precursor and mature peptides) and their receptors, thereby allowing curation of neuropeptide families in both pest and beneficial insect species. In order to collate this information and to make it openly available, the Database for Insect Neuropeptide Research (DINeR, www.neurostresspep.eu/diner/infosearch ) was created. DINeR is a web-based database-application used for search and retrieval of neuropeptide information of various insect species detailing their isoform sequences, physiological functionality and images of their receptor-binding sites, in an intuitive, accessible and user-friendly format. A separate work stream utilised State-of-the-art Confocal Microscopy to image neuropeptide binding sites across multiple insect species. These data are also available on DINeR.

WP1 also included cutting-edge Mass Spectrometry and imaging together with bioinformatics analysis via specifically create pipelines to analyse the transcriptome and peptidome (precursor and mature peptides for multiple neuropeptide families; as well as cognate receptor sequences) of insect pest species, and also pest species for which no such information had previously existed. These approaches have resulted in predictive value for designing targeted peptide-based insecticides specific for pest species but not for beneficial or non-target species. They can also been used for emerging alien pest species, to provide neuropeptide ‘signatures’ for such species and potential novel targets for control.

Overall, WP1 has delivered the most complete database for insect neuropeptides to date, new ‘omics pipelines and technologies for assessment of neuropeptides and their function and candidate neuropeptides for exploitation as novel biopesticides in downstream work packages.

In WP2, functional characterization of selected neuropeptides across the range of chosen insect species was achieved. These insects include target pest species, relevant non-pest insects and the genetic model Drosophila melanogaster. Initially, a set of neuropeptides was chosen for study based on literature data, but peptide candidates emerging from ‘omic approaches in WP1 have also been under study.

Since several of the candidate peptides were functionally uncharacterized in the insects of interest, they have been tested in a wide-ranging set of bioassays, as well as for activation of peptide receptors in vitro. Exposure of insects to stress of various forms, combined with manipulation of neuropeptide levels has been performed to screen for effects of candidate peptides. This stress exposure has also been used for analysis of changes in the insect peptidome profile. Using D. melanogaster we have applied genetic tools to study neuropeptide action mechanistically and screened for deleterious effects of peptide over-expression. Both D. melanogaster and other insects have been examined for changes in their metabolome after manipulations of neuropeptides. Finally, genetic tools have been applied to develop conditional transgenes that can be expressed in pest insects for control of reproduction.

WP2 has now generated a priority-list of functional candidate neuropeptides for development as peptide analogues to be assessed in WP3 and 4.

WP3 is centrally embedded in the project and aimed to prioritize the most promising neuropeptide systems based on input from the obtained results in WP1 (Omics approaches and development of expression systems) and WP2 (Functional characterization of selected neuropeptides). High priority candidates were selected based on several criteria including: biorationality, lethality, selectivity, production cost and formulation, end user needs and existing IP. Critical evaluation of the available data against these criteria, did confirm the suitability of an originally chosen suite of neuropeptides in the context of the project. However, some peptide systems received a relatively lower priority because of problematic synthesis or because of less severe effects in selected target species or limited knowledge on pharmacology. As such, the prioritized candidates for the design of more biostable peptide analogues will be further validated in WP4 (Validation of candidate peptide analogues; and of key neuropeptides and neuropeptide promoter-effectors in target species) and WP5 (Moving from lab to field: exploiting new knowledge to address end-user needs). In addition to the prioritization of candidate neuropeptides, a global market size of susceptible and important crops was carried out. An analysis was made of current and emerging pests in agriculture, horticulture and forestry. This analysis has validated the chosen targets that represent major pests for which new control methods will be of great value.

Studies in WP 4 focus on synthesis of peptide analogues and examination of their in vivo or in vitro activity. All of the bioassays used in this part of study were developed within the frame of WP-2 and the peptide analogues synthesized were based on the evaluation made in WP-3, where the most promising neuropeptide were prioritized. Neuropeptide analogues were designed using a conformation-based strategy on active core regions. Some peptides were synthesized with a focus on modification of residues adjacent to known or suspected scissile peptide bonds. Analogues were synthesized for a range of relevant peptide families and their activity was tested (by injection or feeding) on a variety of insects (Drosophila spp. Beetles, moths, aphids and locus) in vivo, and on some functions in vitro. Receptor-based binding assays (based on Ca flux) were also used to select peptides that exhibit high affinity toward a given neuropeptide receptor. The data revealed a few active analogues that modified the ability of the tested insects to tolerate starvation, desiccation or cold shock stress, affected feeding as well as developmental and reproductive behaviour. Peptide analogues had also an effect on secretory function of Malpighian tubules in Drosophila and lipid metabolism in locust. Evaluation of the effect of neuropeptide overexpression was tested in transgenic Drosophila melanogaster and resulted in phenotypic changes. Assessment of the effects of abnormal neuropeptide expression was also carried out by means of the tet-off expression system. Experiments in this part are still under evaluation. Validation of the role of neuropeptide precursor genes in insects was carried out by knockdown assays of neuropeptide precursors. The experiments resulted in modifications in hormonal levels and they also affected development. Further evaluation of the effect of the active analogues is being examined by metabolomics analysis of insects exposed to biologically active analogues from WP-2 and the preliminary results of WP-4. All of the above studies are still under evaluation. Once completed, the most potent peptide analogues of this WP will be further used in cage or greenhouse experiments and will enable to evaluate their potency as insect control prototype candidates.

WP6 focuses on the management and coordination of nEUROSTRESSPEP. It covers project management, financial management, reporting, communication and risk management. nEUROSTRESSPEP has a Project Manager and Project Administrator, who provide project management support to nEUROSTRESSPEP. In terms of outputs, management bodies including the General Assembly (GA), Executive Board (EB), Intellectual Property Rights Committee (IPRC) and Expert External Advisory Board (EEAB) have been created to govern the project. These bodies meet regularly to review project progress and provide feedback to steer the direction of the project. Communication and collaboration amongst the consortium is frequent and effective and takes place via Basecamp, teleconference, email and face-to face meetings. WP6 manages progress reporting, both internal to the consortium via progress reports, as well as external progress updates via the project’s website and social media account. WP6 also monitors project outputs, ensuring that deliverable, milestone and periodic reports are delivered on time and to a high standard.

WP7 is led by Innovate UK’s Knowledge Transfer Network (KTN), who helps business to strengthen the economy by capturing maximum value from innovative ideas and scientific research. Together with University of Glasgow (UoG), a website for the project with sections for participants, the scientific community, policy makers and the public has been created since project inception (www.neurostresspep.eu), as well as an internal dissemination system. KTN have also launched the use of social media (e.g. Twitter @nEUROSTRESSPEP).

For communication and innovation networking, KTN has conducted a stakeholder mapping and engagement; and identified key organisations for the nEUROSTRESSPEP user group based on relevant endusers including growers and producers, industry, retailers, and consumer organisations.

KTN has so far carried out market analysis for crop protection. They are currently working to create an exploitation plan based on relevant data and will decide on metrics for measuring success of exploitation. KTN produced a video summarizing the project which is uploaded to the project website, and currently producing a project brochure for dissemination and end user engagement purposes. KTN with UoG (WP6) also continuously monitor publication of the results of the project through scientific papers, news releases, conference proceedings, presentations while ensuring IP is not infringed (via the IP Rights Committee, led by KTN).

Altogether, WP7 will enable innovation impact of the nEUROSTRESSPEP programme.